The Channel-billed Cuckoo is the largest parasitic cuckoo in the world.
[Parasitic meaning laying its eggs in the nests of other birds.] 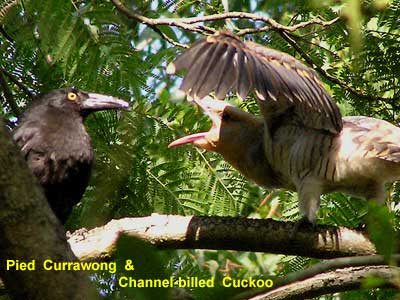 This web page shows the juvenile Channel-billed Cuckoo. Two chicks "grew up" in our backyard this summer. Their incessant crying from dawn to dusk will not be missed when they leave.

The Channel-billed Cuckoo migrates to north-eastern Australia from New Guinea and Indonesia each spring.

It lays its eggs in the nests of hapless Australian Magpies, Currawongs and Crows.

As these images show, the baby cuckoo is twice as big as the surrogate parent.

From observation, currawongs normally yield to both magpies and kookaburras. But were seen to attack and drive away any bird remotely near their chicks. 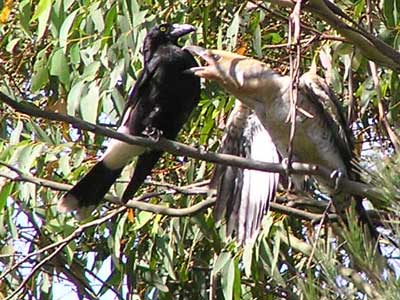 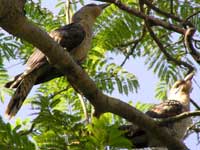 The adult Channel-billed Cuckoo (not shown here) has different colouring.

The buff yellow of the juvenile becomes white; its beak goes grey, and it develops a red ring around its eyes - and it never sends a Mothers' Day card.


The Australian Museum has more information and images. 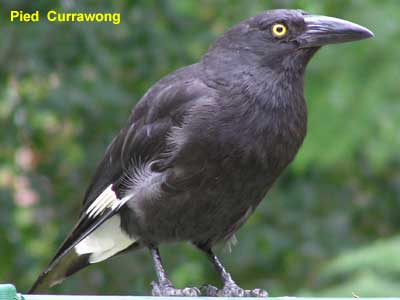 Both parents would be exhausted at having to find food for two chicks that are so much bigger than them.

Hard to tell the male from the female currawong, but one parent had a bung eye and missing tail feathers - probably received when feeding the "baby" cuckoos.

We told them that they were not their babies, but they would not listen.

I imagine that the chicks simply mimic a baby currawong's call and, of course, amplify it.


These photos were taken in Cheltenham in Sydney.