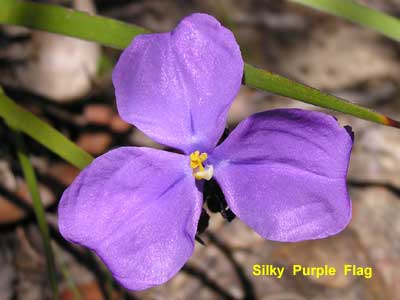 A most delicate and stunning flower that only lasts a day.

A member of the Iris family - family Iridaceae - whose 1,500 species world-wide include freesias, gladiolis, crocuses, and of course irises.

There are about 80 genera (sub-families) of which the Patersonia genus is one. There are about 19 species in this genus - most of which only occur in the south-west of Western Australia.

The New South Wales Flora Online web-site details four of these. Two of which are included below.

The Silky Purple Flag (Patersonia sericea) is the most common species on the East Coast. 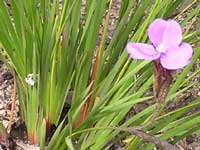 Its 5cm flowers appear in spring. It can be distinguished from other Purple Flag species by the silky hairs on its spathe (bud), wider leaves (5mm) and its flower stems coming from its fan-like base. 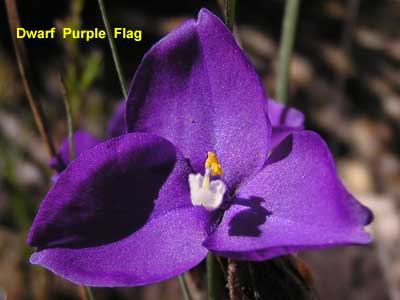 The Dwarf Purple Flag (Patersonia longifolia) is a smaller plant and occurs from Sydney and the adjacent ranges down into Victoria. 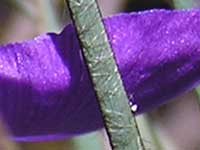 It can be distinguished from the Silky Purple Flag by its leaves - which are bluish-green, narrower (2mm), sometimes twisted and have hairs crisscrossing them - see close-up to the right. 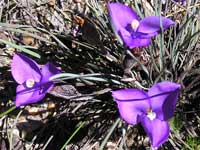 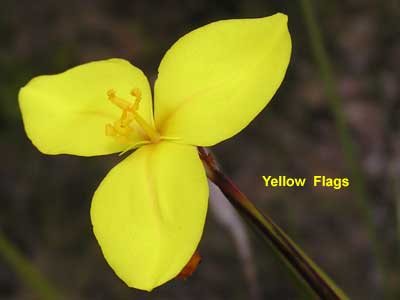 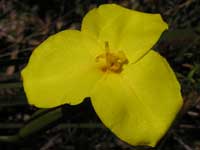 It looks like a Purple Flag that has been completely sprayed yellow. 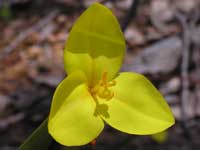 It flowers in spring.

These photos were taken north of Augusta in Western Australia.