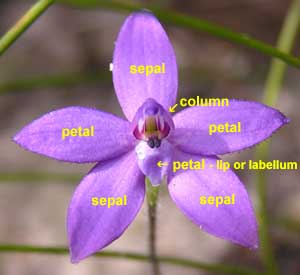 There are about 1,000 species of Orchids in Australia and as many as 35,000 species worldwide - making it the largest flower family.

There is only one commercial substance produced from Orchids - vanilla - which is produced from the fruit pod of Vanilla planifolia.

Although Orchids vary greatly in form, colour and size, their flowers are composed of 6 segments. The outer 3 segments are the sepals; and inner three segments are the petals. The third petal becoming a lip or labellum.

Although the sepals and two of the petals vary greatly across the orchid family, it is the third petal (the labellum) and the column that achieve fascinating, and at times bizarre shapes, sizes and colours.

Insects being the principal pollinators of orchids, often use the labellum as a landing place.

A seedpod may contain more than 2 million seeds.

The Small Waxlip Orchid (Glossodia minor) kindly consented to be used as a model for this botany lesson. The photos above were taken in the Lane Cove National Park.

An index to the orchid images included below. 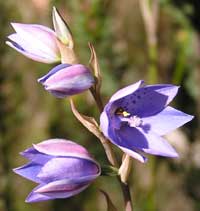 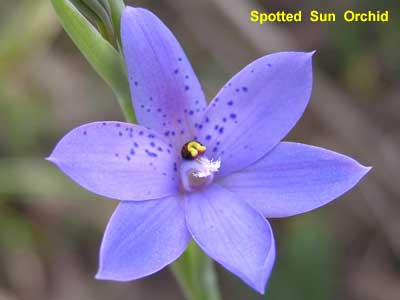 The flower is 25mm wide, but needs a sunny day to open.

It is best identified by the finger like papillae as not all Spotted Sun Orchids have spots as this image shows.

They also have a hint of vanilla when smelt.

The photos of the Spotted Sun Orchid were taken in Lane Cove National Park.

just what the amateur botanist wants to hear ...