There are five Grevilleas that are commonly referred to as Spider Flowers. 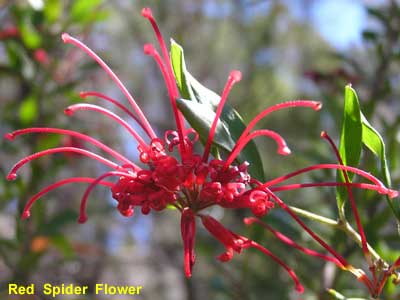 The Green Spider Flower was found at Glenorie - thanks Sal.

The spider flowers flower in winter and spring, and are mainly restricted to the Sydney sandstone region. 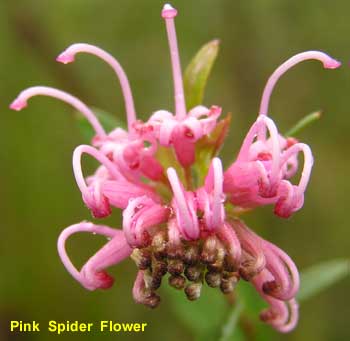 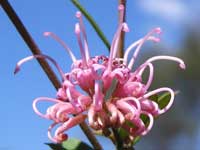 The Pink Spider Flower can vary from a vibrant pink to nearly white - as shown on the bottom right.

The flower is about 30mm across and it is similar to the White Spider Flower - however its leaves are not long. 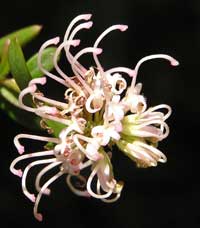 The numerous plants I have found in the Lane Cove National Park were no more than a metre in height - this was probably due to bush-fires which swept through the area a few years ago.

I have seen plants in the Blue Mountains that have been up to 2 metres tall. 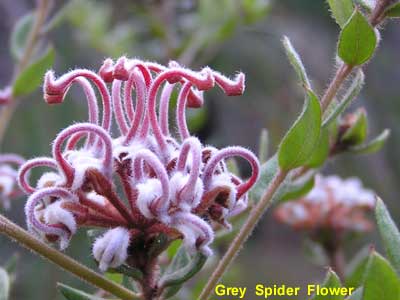 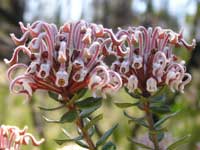 The Grey Spider Flower plants have a profusion of flowers - the styles of which can at times be likened to a small flock of flamingos.

The flowers are 50mm across and about 40mm in height.

In early spring they form an honour guard on either side of the fire trail between Pennant Hills Park and the Lane Cove River.

Spot flowers occur throughout the year. 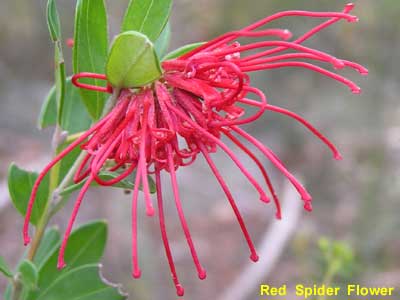 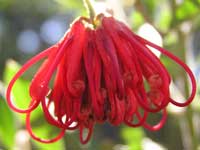 The Red Spider Flower is a vivid crimson and is the most spider-like of the spider flowers.

Each flower hangs from a stalk like a spider suspended from its web.

The image to the right shows it about to unfurl and adopt its spider like pose. 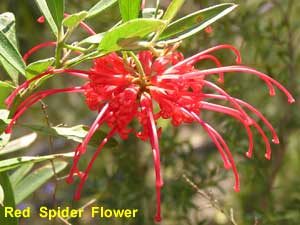 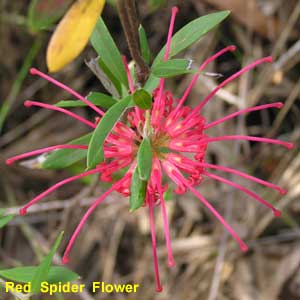 The wonderful natural symmetry of the Red Spider Flower from above as it stretches its "legs" is shown on the right.

Being one of only a few red flowers in the Lane Cove National Park, it can be easily found on dry sheltered, but not shady, ridges in late winter and early spring.

The only other plant with largish red flowers (that comes to mind) is the Mountain Devil, and of course the far less common Waratah. 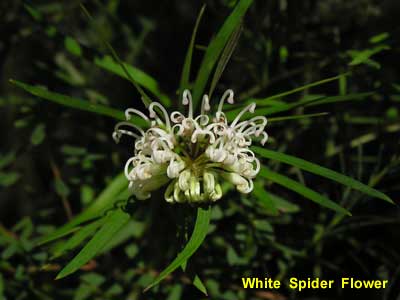 The White Spider Flower is the smallest of the spider flowers being barely 20mm across. 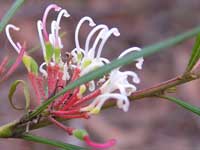 Its flower is similar in appearance to the Pink Spider Flower, although its leaves are quite different - the White Spider Flower having a slender long leaf that's around 70mm in length.

The styles go red as the fruit (seed pod) develops. 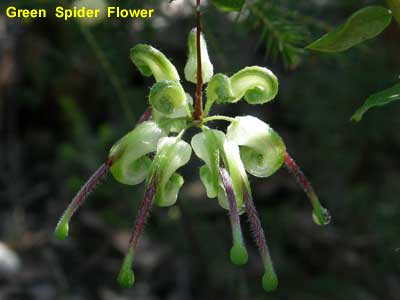 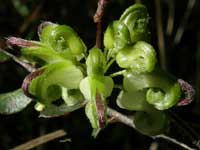 The flower is around 60mm across and the spider's "legs" are 15mm long. 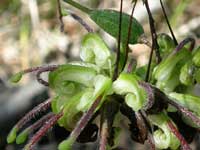 The oval concave leaves are 15mm long and 10mm wide and are hairy underneath.

The botanical name comes from the mucro (leaf tip).