Wave Rock is a granite cliff 15 metres high and over 100 metres in length.

Wave Rock is 4 km east of Hyden - which is 350 kilometres east of Perth.

Hippos Yawn and Mulkas Cave are nearby.

The early settlers were drawn to the area by the Sandalwood trees - Santalum spicatum. 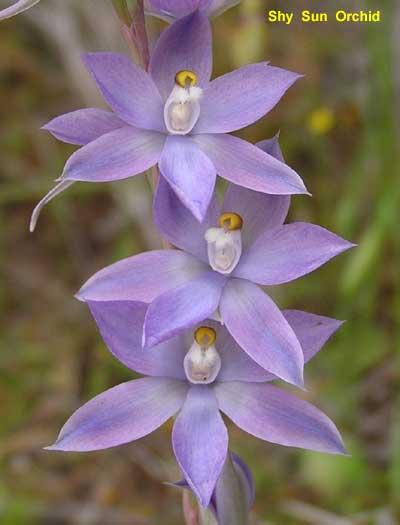 In 1848 exports of "wooden gold" was the young colony's top earner, accounting for almost half of all incoming revenue.

The one shown here is on Wave Rock itself and is one of only a few that remain in the area.

Several orchids were also found on the Rock including the Shy Sun Orchid to the left, and the Bee Orchid - see our WA Orchids web-page.

Initially built in 1928, its capacity was increased in 1951 to service the Hyden Township.

Low walls have been built on Wave Rock to channel the rainwater into the dam.

Its effectiveness is shown by its fullness - bearing in mind that the catchment area is less than 30 hectares, and the annual rainfall is only 337mm.