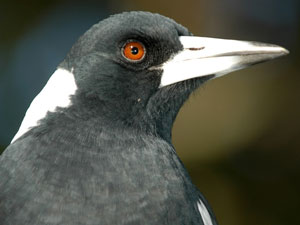 Australian Native Birds
Black Birds
Magpies, butcherbirds
and ravens, etc
I have separated the black birds into their own group to assist in identifying them.

Included are the Cracticidae, Corvidae and Corcoracidae families - whose total Australian contigent totals 16.

I have taken the liberty of including the Magpie Lark in this group - again to assist in identification - and may include other black birds accordingly. 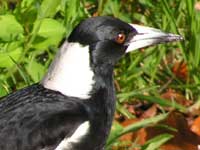 Australian Magpie
(Black-backed Magpie, juvenile)
(Cheltenham, NSW)
The juvenile Australian Magpie has a grey mottled look, and its eyes are brown. It tends to follow its parents around screeching to be fed - even when it is nearly fully grown. 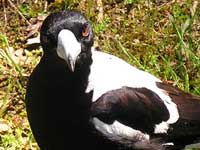 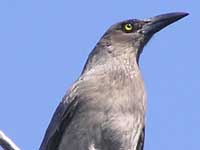 Grey Currawong
(Leura, NSW)
The Grey Currawong occurs across the southern Australian states. It has several variations including brown and black. The yellow eyes help identify it as a Currawong. 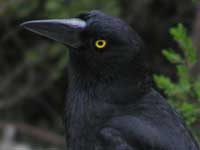 Pied Currawong
(Leura, NSW)
Found in eastern Australia, the Pied Currawong is often heard referred to as a magpie - but its yellow eyes and all black collar readily distinguish it. 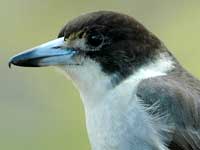 Grey Butcherbird
Identified by their grey back and white lores (patch between the eye and the beak). Butcherbirds' beaks have a blue tinge.
Photo by Martin Kandilas 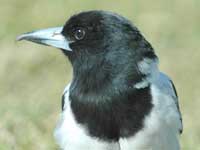 Pied Butcherbird
(Nerang, Qld)
The Pied Butcherbird is found in most parts of Australia. Butcherbirds are easily identified by their characteristic hooked-beak.
Photo by Martin Kandilas 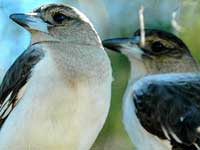 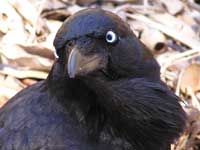 Australian Raven
(Perth, WA)
The Australian Raven is all black and has white eyes.
Ravens are distinguished from other "black birds" by the shaggy feathers on their throat. 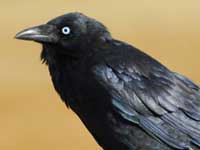 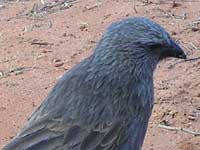 Apostlebird
(Mungo NP, NSW)
The Apostlebird is a ground forager - where it is frequently seen. It is found in non-coastal Queensland and NSW. The birds at Mungo seem to be bluer than the browner ones found in reference books. 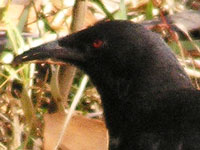 White-winged Chough
(Megalong Valley, NSW)
The White-winged Chough (pronounced "chuff") is identified by being all black with red eyes and a slightly hooked/bent beak. The "white winged" is a large white patch under its wings. 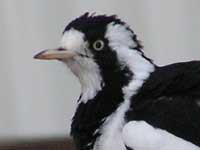 Magpie-lark
(female)
(Broome, WA)
The Magpie-lark is smaller than the Magpie. It is widely known as the Peewee due to its call. The male has a black throat and a white patch over his eye.