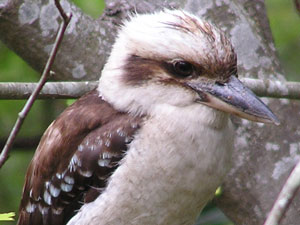 The Laughing Kookaburra
(click images to see larger ones)
﻿

25-30cm (10-12 inches) is the arbitrary minimum size of Larger Birds. This is measured from bill tip to tail tip.

As a guide, magpies and seagulls are around 40cm - while wrens and robins are around 15cm.

The second part of the webpage are the birds of prey which besides eagles and falcons, also includes owls.

There are over 40 members of the birds of prey group. 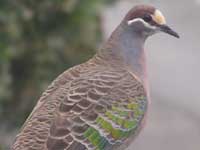 Common Bronzewing
(male)
(Albany, WA)
The aptly named Common Bronzewing can be found throughout Australia. The female has a grey forehead compared to the male's cream forehead. 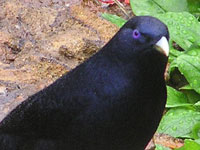 Satin Bowerbird
(male)
(Leura, NSW)
The male Satin Bowerbird doesn't gain his shiny bluish black feathers until he is 7 years old. In his earlier years he can be distinguished from the ladies by his white beak as shown in this image. 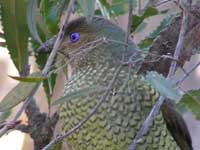 Satin Bowerbird
(female)
(Leura, NSW)
The Satin Bowerbird has the most vivid blue eyes. The bowerbird nest is not the bower, but a "real" nest in a tree. 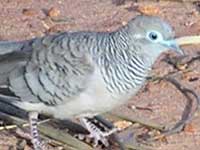 Peaceful Dove
(Cape Leveque, WA)
The Peaceful Dove is found in the eastern states and the north of WA and the NT. The light blue circle around its eyes easily distinguish it. It is a ground forager. 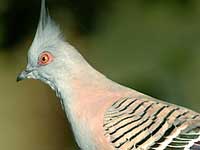 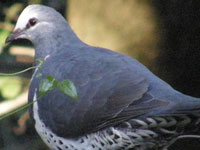 Wonga Pigeon
Mt. Wilson, NSW
Found in forests along the coast and ranges from Queensland to Victoria. Often on the ground and in pairs. 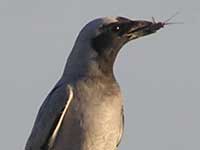 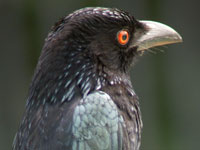 Spangled Drongo
(Buderim, Qld)
I was delighted to read in Wikipedia that "the spangled drongo is the only drongo to be found in Australia". Its flared tail identifies it. Here's another image.
Here's an image of an immature bird - see its dark eyes.
Photos by Peter Bettess and Alan Lymbery 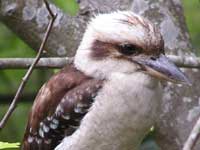 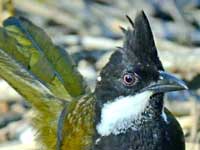 Eastern Whipbird
(Brunswick Heads, NSW)
Found in wet forested areas and coastal scrubs from Cairns to Melbourne, its distinctive whip cracking call identifies it - although it is more often heard than seen.
Photo by Alan Lymbery 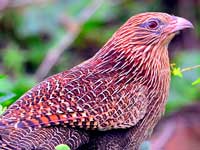 Pheasant Coucal
(Wooli, NSW)
This very large cuckoo can be found from Sydney around the "top-end" and down to Exmouth in WA.
It's the only Australian cuckoo that builds a nest.
Here's another image.
Photo by Alan Lymbery 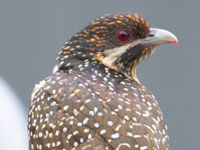 Eastern Koel (female)
(Hazelbrook, NSW)
Eastern Koels are migratory cuckoos and arrive in the Blue Mountains in spring, and then provide a very early morning wake-up call until they head back to New Guinea/Indonesia in early Autumn.
Photo by Niel Carey 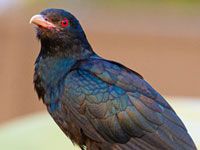 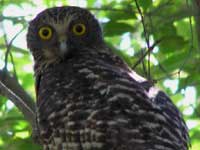 Powerful Owl
(Lane Cove NP, NSW)
The largest owl in Australia, and apparently the only owl that has the standard "hoot hoot" call.
To hear its call, and learn much more, visit the excellent Owl Pages website.
It is a threatened species. 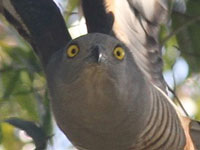 Pacific Baza
(Berrilee, NSW)
Bearing the distinctive hooked beak of a bird of prey, the Pacific Baza was formerly called "Crested Hawk".
It can be identified by the crest on its head - and of course its yellow eyes, grey head and shoulders, and striped body.
Photo by Jeremy Laws 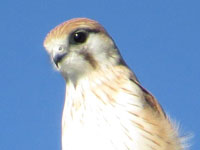 Nankeen Kestrel
(female)
(Wallaroo, SA)
With the tell-tale dark tear of the falcon, the female Nankeen Kestrel has a brown crown, while the male's is grey.
Here's an image of the male.
Photos by Jimmy Hislop 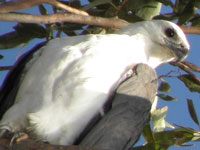 White-bellied Sea-Eagle
(Jervis Bay, NSW)
Easily identified and magnificent.
Found all around Australia, except for the arid regions.
Photo by Mary 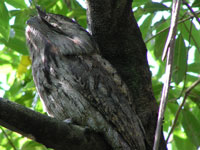 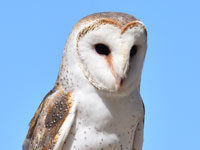 Barn Owl
(Brisbane, Qld)
The Barn Owl is found throughout Australia and indeed on every continent in the world except Antarctica.
Here's another image.
Photos by Alan Lymbery 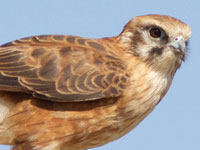 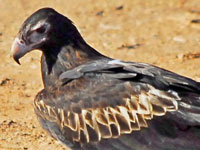 Wedge-tailed Eagle
(Nullarbor, SA)
Found throughout Australia, it is our largest bird of prey.
The female of the species is larger than the male.
Photo by Alan Lymbery