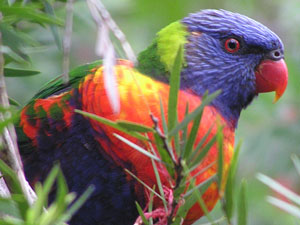 Australian Native Birds
Parrots
Parrots, lorikeets
and cockatoos, etc
There are roughly 375 parrot species in the world with 56 species in Australia.

The estimates vary depending on the literature that's referenced.

Parrots belong to the order Psittaciformes, which is divided into three superfamilies:

Species. To clarify, the Crimson Rosella is one species - although there are 6 sub-species or races, including the Adelaide and Yellow Rosellas. 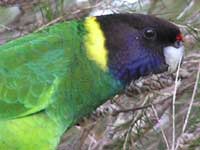 Australian Ringneck
(Twenty-eight Parrot)
(Pemberton, WA)
There are several races of this parrot.
The Twenty-Eight Parrot is named after its call and is found in the south-west corner of Western Australia. 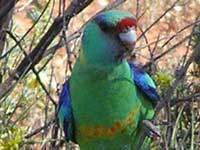 Australian Ringneck
(Mallee Ringneck)
(Cobar, NSW)
The Mallee Ringneck is found in the arid parts of NSW, Victoria and Queensland.
It is distinguished from the other members of its family by its blue/green head and the orange on its chest. 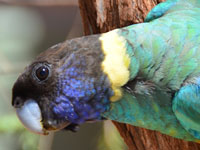 Australian Ringneck
(Port Lincoln Parrot)
(Kings Canyon, NT)
The Port Lincoln Parrot has a yellow belly and no red above its beak and is found in Western Australia, South Australia and into the Northern Territory.
Photo by Rosemary Culos 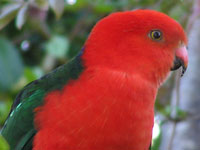 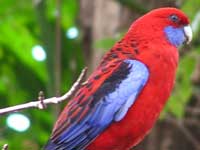 Crimson Rosella
(Cheltenham, NSW)
The Crimson Rosella can be found in New South Wales, Victoria and South Australia in open forest areas. It has a distinctive melodic piping call. 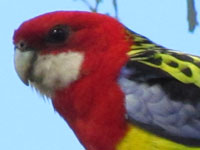 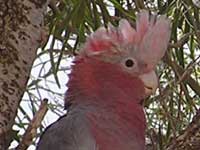 Galah
(Mungo NP, NSW)
The Galah is found throughout Australia and its numbers are increasing - most probably due to land clearing.
The male has dark eyes; the female red eyes - as this image shows.
Here's a great photo by Michelle Abbott. 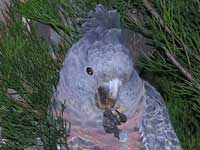 Gang-gang Cockatoo
(female)
(Leura, NSW)
Found in the forests of south-eastern Australia, the male has the distinctive crimson head. 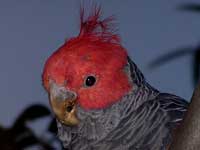 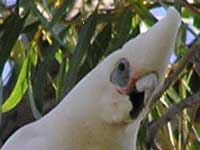 Little Corella
(Hay, NSW)
Identified by the blue around its eyes, and lack of red on its chest, the Little Corella can be found throughout the semi-arid regions of Australia. 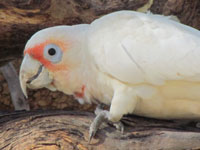 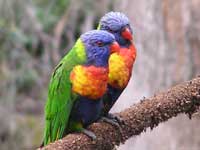 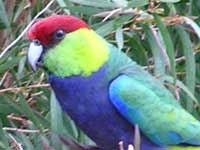 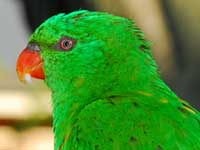 Scaly-breasted Lorikeet
Found along the east coast and hinterland, it is the only Lorikeet that has a completely green head. 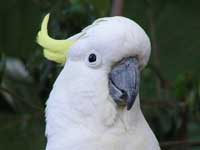 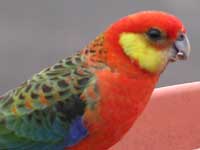 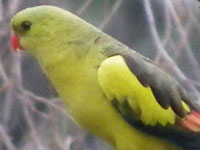 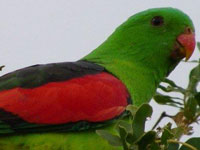 Red-winged Parrot
(male)
(Prairie, Qld)
Found along the Top-end, most of Queensland and northern NSW, the male has a dark back. 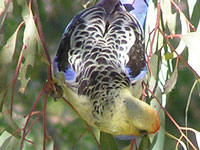 Yellow Rosella
(Wirrabara, SA)
A race of the Crimson Rosella family, the Yellow Rosella is found along the waterways of inland NSW. 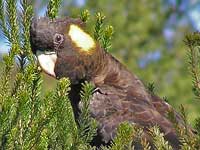 Yellow-tailed Black Cockatoo
(female)
(Leura, NSW)
A large cockatoo, it is found in the south-east coast and ranges from Central Qld to Adelaide and Tasmania.
Stunning in flight, the male has a darker bill and a red eye-ring.
Here's another image and another. 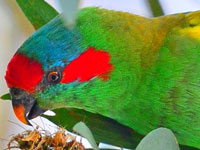 Musk Lorikeet
(Ocean Shores, NSW)
Found from Rockhampton south to Adelaide plus Tasmania, on coast, ranges and inland slopes and plains. Usually in noisy flocks.
Here's another image and another.
Photos by Alan Lymbery 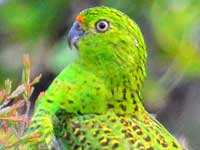 Eastern Ground Parrot
(Wooli, NSW)
Found along the coast from Brisbane south to Victoria plus throughout Tasmania.
It's shy and is largely terrestrial.
It's listed as "vulnerable" in NSW.
Photos by Alan Lymbery