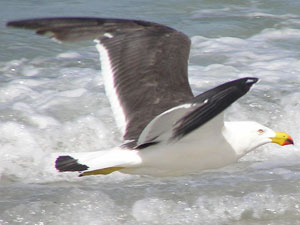 Our definition of "water birds" includes shore birds and waders.

This includes migratory birds such as the Artic Tern - which travels from its Arctic breeding grounds to the Antarctic and back again each year. Such birds are "shared" with many countries. 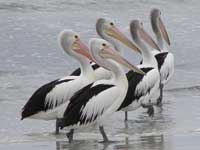 Australian Pelican
(Port Neill, SA)
"A wonderful bird is the pelican
His bill will hold more than his beli-can.
He can take in his beak
Food enough for a week,
But I'm damned if I can see how the helican".
Dixon Lanire Merrith,
"The Pelican" (1910) 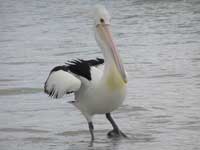 Australian Pelican
(Port Neill, SA)
Found throughout Australia - wherever there is fresh or salt water.
When breeding, their bill goes pink and a yellow patch forms on their chest.
Arguably the world's most recognisable bird. Ungainly on land, but graceful in the air, and efficient in the water.
Here's another image. 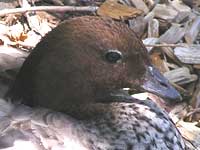 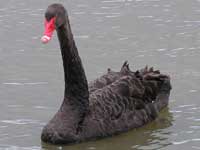 Black Swan
(Canberra, ACT)
Although the Black Swan is a symbol of Western Australia, it is found throughout the waterways of Australia.
Its cygnets (baby swans) are grey - they are shown in the larger image. 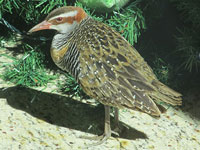 Buff-banded Rail
(Hyde Park, Sydney, NSW)
Stephanie saw this bird inside a building in George St, Sydney - it probably thought the Christmas decorations were very ripe fruit.
It is found throughout Australia, except in the drier areas and Tasmania.
Its hatchlings are sooty black.
Photo by Stephanie Whittle 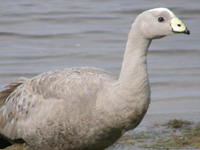 Cape Barren Goose
(Lake Tyers Beach, Vic)
A very distinctive endemic bird - found in southern Victoria, South Australia and Western Australia - plus parts of Tasmania.
The goose in these images was happy to have its picture taken.
Here's another image. 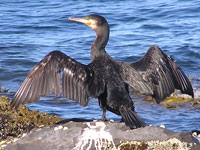 Great Cormorant
(Jervis Bay, NSW)
Distinguished from other cormorants by its white cheeks and black neck, it is the largest Australian cormorant.
Like the Darter, it is often seen holding its wings out to dry.
Here's an image of some juveniles - their blackness is yet to develop. 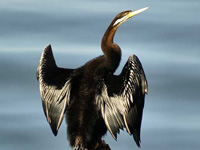 Darter
(male)
(Mannum, SA)
Distinguished from Cormorants by its long pointed beak.
The Darter is found throughout Australia - except for the very dry areas.   Here's another image.
Photos by Ron Johnson 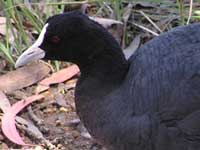 Eurasian Coot
(Wentworth Falls, NSW)
It is found throughout the waterways of Australia. Instead of webbed feet, it has broad flattened toes. 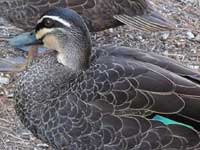 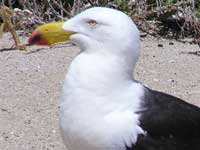 Pacific Gull
(Dutton Bay, SA)
Easily recognised by its red "lipstick", the Pacific Gull is twice as large as the Silver Gull.
Pacific Gulls are found in large families along the southern coast of Australia.
Here's another image. 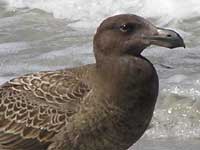 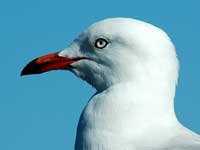 More commonly known in Australia as a seagull. Silver Gulls are found wherever there is water - salt or fresh.
Photo by Martin Kandilas 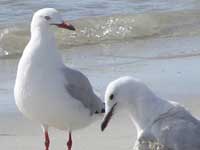 Silver Gulls
(juvenile)
(Dutton Bay, SA)
They are known as scavengers, but perform a valuable service in this regard. The juvenile has dark legs, eyes and beak. 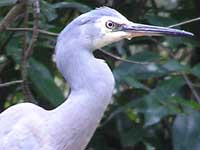 White-faced Heron
(Lane Cove NP, NSW)
The White-faced Heron is found through most of Australia. It is characterised by its light grey feathers, white face and yellow legs.
Here's another image taken at Jervis Bay, NSW.    Photo by Mary 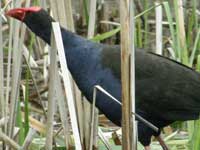 Purple Swamp Hen
(Dunns Swamp, Wollemi NP, NSW)
Found in swamps and marshes throughout Australia. It has very long toes - as shown in this image. 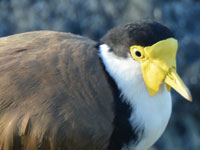 Masked Lapwing
(Port Macquarie, NSW)
Identified by its large yellow wattle, it is found throughout the eastern and central states.
Photo by Rosemary Culos 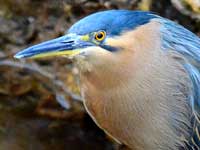 Striated Heron
(Brunswick Heads, NSW)
The Striated or Mangrove Heron can be found in mangroves and tidal flats from Eden in NSW around the top-end to Geraldton in WA.
Photo by Alan Lymbery 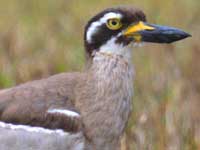 Beach Stone-curlew
(Brunswick Heads, NSW)
This uncommon shorebird can be found from NSW around the top-end down to Carnarvon in WA.
It was formerly known as "Beach Thick Knee".
Photo by Alan Lymbery 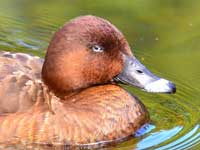 Hardhead
(Byron Bay, NSW)
The only Australian pochard or diving duck. Also known as the White-eyed Duck, it's found throughout Australia except for the WA/SA border region.
Photo by Alan Lymbery 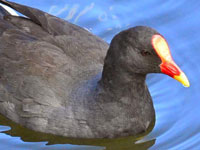 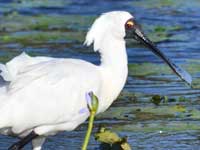 Royal Spoonbill
(Brunswick Heads, NSW)
This very distinctive bird with its "spoonbill" and yellow above its eyes can be found in wetlands throughout Australia.
Photo by Alan Lymbery 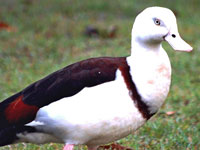 Radjah Shelduck
(Baffle Creek, Qld)
Its brown chest band identifies this duck. It can be found in coastal wetlands and rivers in the Northern Territory and Queensland.
Photo by Alan Lymbery