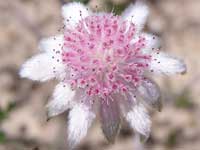 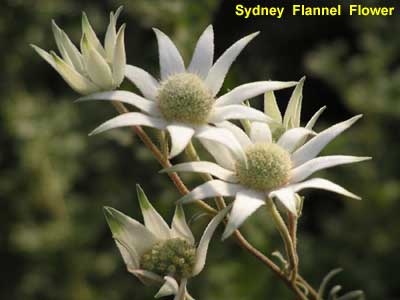 Flannel Flowers. It is not until you look closely at their petals that you understand the name.

The petals are really bracts. The flower heads are in the centre.

There are fifteen Actinotus species in Australia; five in NSW. The five in NSW are -

They all belong to the Actinotus genus, family Apiaceae.

The Apiaceae family includes carrots, parsnip and celery, and a host of herbs such as parsley, caraway, coriander and fennel. And hemlock. 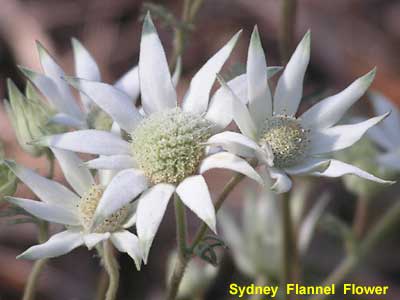 It is prolific in the sandstone national parks in the greater Sydney area and can be sometimes found in spectacular drifts. 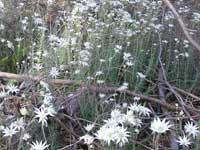 The flowers are about 50mm in diameter and appear in Spring. 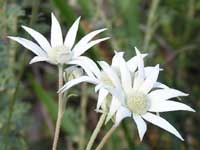 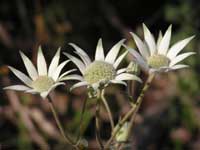 The photos of the Sydney Flannel Flower were taken in the Lane Cove National Park in Sydney. 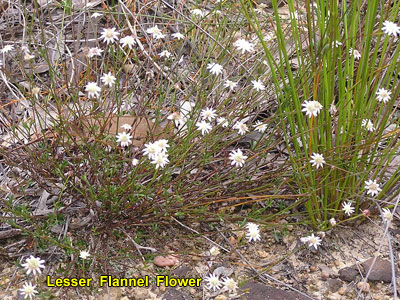 This is the Lesser Flannel Flower, although in this case less is certainly more as it peppers native woodland and open forest in spring, summer and well into autumn.

It is both prolific and hardy. Its flowers are about 10mm in diameter.

The photos of the Lesser Flannel Flower were taken in the Upper Blue Mountains. 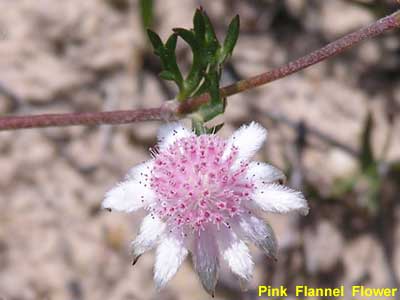 Until a few years ago, the stunning Pink Flannel Flower was rarely seen as it only appears in the summer following a bushfire.

Recent bushfires and controlled burns in the Blue Mountains has meant that it is no longer rarely seen.

Its flowers are about 20mm in diameter. 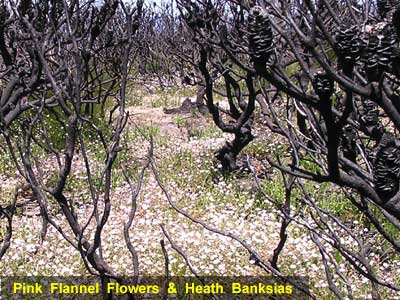 The Pink Flannel Flowers pictured here appeared in the summer following the December 2002 bushfires in the Blue Mountains.

As with banksias, it is believed that the seeds require smoke to germinate. These seeds could have lain dormant for decades.

Shown here are the burnt remains of a grove of Heath Banksias. Although not shown clearly, there were hundreds of banksia seedlings amongst the Pink Flannel Flowers.

Here's images of a cream and a white Pink Flannel Flower. 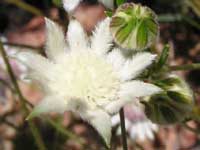 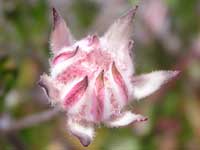 The photos of the Pink Flannel Flower were taken in the Upper Blue Mountains. 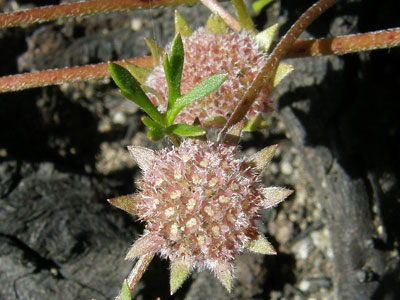 Dwarf Flannel Flower - Actinotus gibbonsii
An uncommon tiny spreading plant that seems to only appear the year after bushfires - similar in behaviour to the Pink Flannel Flower.

Its flowers are about 10mm across and with its colouring makes it hard to detect.

Here's another image and another.