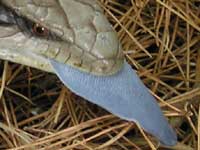 With close to 1,300 species, skinks are the largest family of lizards in the world.

There are 389 species of skink in Australia in 38 genera. Skinks make up about half of our lizard species.

Skinks have the ability to break off part of their tail and regrow it.

NB. The classification of species is not static and differences in the following references will be found.

Species on this webpage: 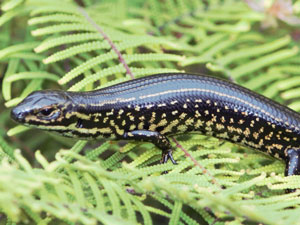 They have a light coloured stripe running from the lip to below the ear, and a short stripe above the ear.

This photo was taken by Nakia Belmer. 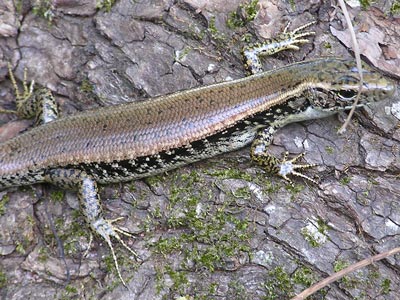 They grow to about 30cm, and can be found in the coastal rivers and creeks of New South Wales and Queensland, and inland in the Murray-Darling River System into Victoria and South Australia.

Its olive glean helps to identify it as does a narrow whitish stripe from its eye down towards its hind legs. 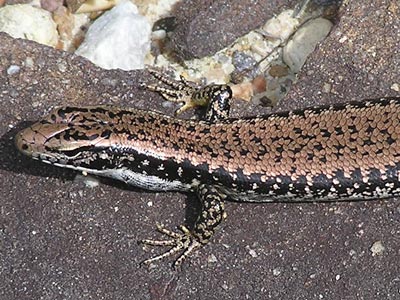 But the lack of the olive glean and stipe down the side of its back most probably identifies the one shown here.

I couldn't get a glimpse of its belly!

There are about thirty species in the Egernia genus. All are viviparous. 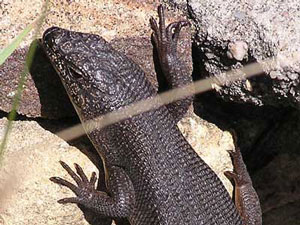 They grow to about 22cm and, as the name implies, live in the crevices of rocky outcrops.

The Black Rock Skink can be found in south-east Queensland, New South Wales and Victoria.

This photo was taken in Blackheath in the Blue Mountains.

There is a belief that you won't find snakes where you find King's Skinks.

This photo was taken in Albany, Western Australia. 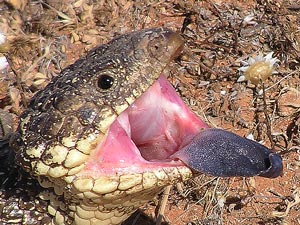 Shingle-back at Mungo NP, NSW
They're the largest lizard in the Skink family and are viviparous.

The six members of the genus are - 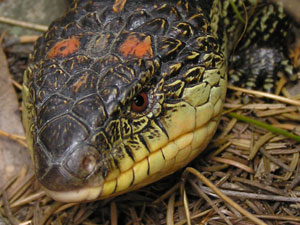 Blotched Blue-tongue
The Blotched Blue‑tongue (Tiliqua nigrolutea) is easily recognised by its orange and/or ochre blotches.

It has a similar shape to the Shingleback, except it has a more standard tail that accounts for about a third of its overall length, and its scales are smoother.

It is also known as the Southern Blue-tongue as it is found in the south-eastern part of Australia.

Their colours vary as these images show. 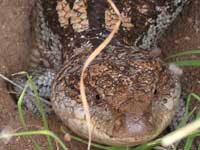 Blotched Blue-tongue  at Bibbenluke, NSW
Note the ticks behind the front legs of the lizard from Bibbenluke - the lizard can't reach this part of its body.

These photos were taken in the Blue Mountains and near Bibbenluke in south-eastern NSW. 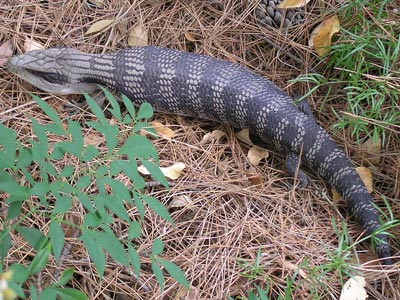 Eastern Blue-tongue
The Eastern Blue‑tongue (Tiliqua scincoides), also known as the Common Blue-tongue, is arguably the best known blue-tongue. This is most probably due to it being "common", and the only one found in the greater Sydney area.

The Eastern Blue‑tongue is the largest Australian skink and can grow to 60cm in length and weigh a kilogram.

Like the other members of the genus, it will hiss and stick out its blue tongue when cornered.

It can be found in all states except Tasmania. In Western Australia it is only found in the eastern half of the state.

This photo was taken in Cheltenham in Sydney.

Shingle-back at Mungo NP, NSW
The Shingle‑back or Stumpy-tail (Tiliqua rugosa) can be found in all southern states except Tasmania.

They grow to about 35cm and are viviparous.

The Shingle-back is also known as the Two-headed Lizard as it can lead a predator into believing that its tail is actually its head, and if threatened, can lose its tail and escape. It can regenerate its tail.

Shingle-back at Lake Grace,WA
The Shingle‑back in Western Australia is a browner colour and can have a different coloured head to the rest of its body.

The first two Shingle-back photos were taken in the Mungo National Park in NSW; the third was taken near Lake Grace in Western Australia.

Copper-tailed Skink
The apt named Copper‑tailed Skink (Ctenotus taeniolatus) grows to about 22cm and can be found all along the east coast. 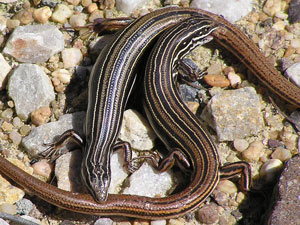 Copper-tailed Skinks
This image shows two Copper-tailed skinks fighting. I can only assume they were males as it was mating season. 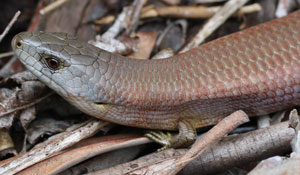 Here's an image that shows the full length and includes a rule. Mainland She-oak Skinks are "live-bearing" and this may be a gravid female. 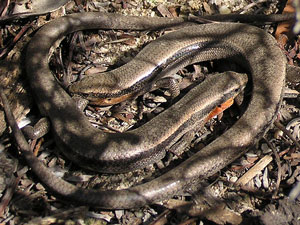 It was formerly the Bassiana platynotum, and can be found in South-eastern Australia.

Members of this skink genus have four fingers and five toes, and lay eggs.

This photo was taken by Jamie Gilmore in the Hunter Valley. 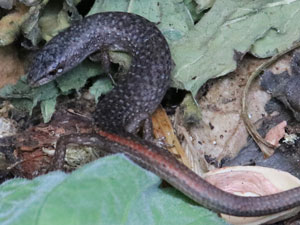 Weasel Skink
The Weasel Skink (Saproscincus mustelinus) is often found in compost bins - which is where I found this one.

The reddish stripe on its side from its hind legs along its tail helps identify it. It lays eggs. 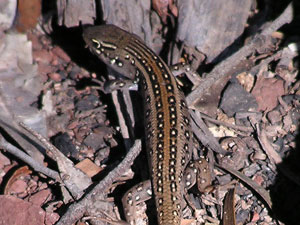 White's Skink
White's Skink (Liopholis whitii) is easily recognised by the white dotted black stripes along its back.

They can grow to over 35cm and can be found in all eastern states as well as South Australia.

This photo was taken in Blackheath in the Blue Mountains.