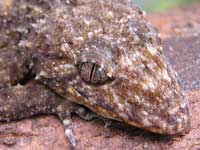 The Southern Leaf-tailed Gecko is a master of camouflage.

Instead of scurrying away, it will lie perfectly still to either catch its prey or prevent it from become something else's.

The Southern Leaf-tailed Gecko grows to about 15cm in length - which is about the size of our friend in the photos here. 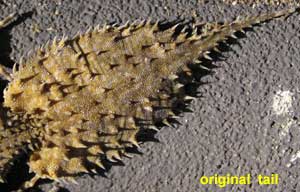 They are found in the greater Sydney area, and live in dark sandstone crevices and cluttered garages.

They have three defence mechanisms - their colouring, a squeal or bark, and discarding their tail.

The squeal is quite surprising when you first hear it - such a loud sound from a little creature.

Dropping their tail is their last resort. The tail wriggles frantically and thus allows the gecko to slip away.

It does regrow, but not as thick and spiky as the original.

The Australian Reptile Online Database lists 175 species of gecko in Australia in 24 genera.

The Australian Museum has more information.